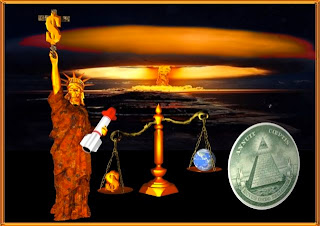 Why America is really so concerned about the push for democracy in the Middle East.
Richard William Posner
Activist Post
A Brief Refresher Course
America is the spawn of empire building and from the start has itself engaged heavily in that activity. In nearly all cases it has shown a preference for bribery, coercion, intimidation and force over diplomacy and cooperation.
As a nation founded on invasion, occupation and genocide, America has maintained its empire by those means to this day.
Although Spain began the slaughter with the voyages of Columbus, the British colonies that became the United States continued it with a vengeance.
On October 26, 1606, King James I of England granted a royal charter to establish The London Company, a for-profit, joint stock venture that was also known as the Charter of the Virginia Company of London. The company’s purpose was the colonization, for profit, of North America.
From the Start; Murdering the Real Americans
In 1607 the British arrived in Jamestown and, shortly thereafter, began the calculated extermination of the indigenous population. By 1890 an estimated 90,000,000 people, in North, Central and South America had been systematically slaughtered in the fulfillment of Manifest Destiny.
The overt genocide in North America was curtailed after the infamous massacre at Wounded Knee in 1890.

I did not know then how much was ended. When I look back now from this high hill of my old age, I can still see the butchered women and children lying heaped and scattered all along the crooked gulch as plain as when I saw them with eyes still young. And I can see that something else died there in the bloody mud, and was buried in the blizzard. A people’s dream died there. It was a beautiful dream. And I, to whom so great a vision was given in my youth, — you see me now a pitiful old man who has done nothing, for the nation’s hoop is broken and scattered. There is no center any longer, and the sacred tree is dead. — Black Elk, Oglala Holy Man on the aftermath of the Massacre at Wounded Knee, South Dakota, December, 1890. The United States Army Seventh Cavalry used Gatling guns to slaughter 300 helpless Lakota children, men and women.

Although efforts at limited, selective genocide have continued, they have become much more clandestine.

Lee Brightman, United Native Americans President, estimates that of the Native population of 800,000 (in the US), as many as 42% of the women of childbearing age and 10% of the men…have been sterilized… The first official inquiry into the sterilization of Native women…by Dr. Connie Uri…reported that 25,000 Indian women had been permanently sterilized within Indian Health Services facilities alone through 1975…

Read more »
← Economic Terrorists: That’s You – Goverment calling alternative currencys ‘forms of terrorism’
As Adjusted Monetary Base Rises By Half A Trillion In 2011, Treasury Runs Out Of Debt Ceiling Delay Measures →