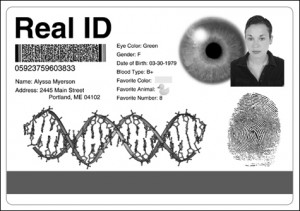 In what could only be described as aMasterpiece in Incrementalism, the long awaited Real ID System is now mandating that states be in compliance by May 11, 2011.

The REAL ID Act of 2005 requires state-issued driver’s licenses and identification cards to meet federal standards by a certain date in order to be accepted for federal purposes. What is that date?  All 56 U.S. jurisdictions received an initial extension through Dec. 31, 2009, from the secretary of the U.S. Department of Homeland Security (DHS).

In December 2009, the secretary issued a statement to waive that deadline.  States must now be in full-compliance by May 11, 2011. What is the penalty for non-compliance?  Residents in non-compliant states will not be able to use their driver’s license to board commercial aircraft, gain access to federal facilities or enter nuclear power plants.– National Conference of State Legislatures

Of particular interest are the latest entries on the NCSL website, which are detailed below.
Today: Where We Stand
On May 11, 2008, state driver’s licenses and identification cards were not be accepted for federal purposes unless the U.S. Department of Homeland Security (DHS) determined that a state was compliant with the Real ID or a state had been granted  an extension by DHS. As of April 2008, all 56 U.S. jurisdictions had received an initial extension from the Secretary of the U.S. Department of Homeland Security. The initial extension is valid until Dec. 31, 2009.

States have the option of filing by for a second extension to May 10, 2011, if the state can demonstrate it is in material compliance with 18 interim benchmarks.

That request must be made by Dec. 1, 2009. If an extension is not received, individuals in those states will not be able to use state-issued driver’s licenses or identification cards to board commercial aircrafts or enter certain federal facilities and nuclear power plants.
To date, Congress has appropriated only $200 million to assist states with implementation of the Real ID.

To read a copy of the Final Real ID Regulations, click here.

The legislative manipulation that occurred in 2004 marks the genesis of the Real ID Act of 2005.
The History of Federal Requirements for State Issued Driver’s Licenses and Identification Cards

In December 2004, President George W. Bush signed into law the National Intelligence Reform Act of 2004 (P.L. 108-458).  The legislation was in response to the recommendations made by the 9/11 commission to reform the U.S. Intelligence community and to implement other security measures to prevent future terrorist attacks against the U.S.

Please read the rest of the comprehensive article