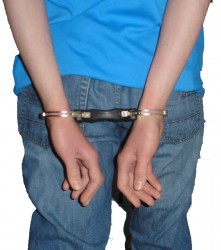 Doesn’t it seem like almost everything is becoming a crime in America now?  Americans are being arrested and charged with crimes for doing things like leaving dog poop on the ground, opening up Christmas presents early, not recycling properly, farting in class and having brown lawns.  But is it healthy for our society for the police to be involved in such silly things?  Every single day the United States inches closer to becoming a totalitarian society.  While there are some that would welcome this shift, the truth is that throughout history the societies that have experienced the greatest economic prosperity have all had at least a certain level of freedom.  Business thrives when people feel free to live and work.  When a government tightens the grip too much many people just start shutting down.  Just look at places like North Korea.  Even though the rest of the world is sending them huge amounts of food starvation is still quite common in that totalitarian regime.  That is why it is so disturbing that it seems like almost everything has become a crime in America now.  As we continue to criminalize relatively normal behavior our slide toward becoming a totalitarian state will only accelerate.

According to the U.S. Bureau of Justice Statistics, as of the end of 2009 a total of 7,225,800 people were either on probation, in prison or on parole in America.

That is a sign of a very, very sick society.  Either we have a massive crime problem or the “control grid” that our leaders have erected for us is wildly out of control.

But how in the world are we supposed to have a healthy economy if our entire nation is being turned into one gigantic prison?

Sadly, it is not just hardcore criminals that are being rounded up and abused by authorities these days.  The following are 14 of the most ridiculous things that Americans are being arrested for….

#1 A Michigan man has been charged with a felony and could face up to 5 years in prison for reading his wife’s email.

#2 A 49-year-old Queens woman had bruises all over her body after she was handcuffed, arrested and brutally beaten by NYPD officers.  So what was her offense?  The officers thought that her little dog had left some poop that she didn’t clean up.

#3 A 56-year-old woman who was once a rape victim refused to let airport security officials feel her breasts so she was thrown to the floor, put in handcuffs and arrested.

#4 In Milwaukee, one man was recently fined $500 for swearing on a public bus.

#5 Several years ago a 12-year-old boy in South Carolina was actually arrested by police for opening up a Christmas present early against his family’s wishes.

#6 In some areas of the country, it is now a crime to not recycle properly.  For example, the city of Cleveland has announced plans to sort through trash cans to ensure that people are actually recycling according to city guidelines.

#7 A 12-year-old girl from Queens was arrested earlier this year and taken out of her school in handcuffs for writing “Lex was here. 2/1/10″ and “I love my friends Abby and Faith” on her desk….

← “Organic” food is no longer safe. The FDA and USDA have colluded in approving the neurotoxin ‘Neotame’ which may be even more toxic than aspartame. No labeling will be required, nor will it be listed in the ingredients.
The Shadow Banking System: A Third Of All The Wealth In The World Is Held In Offshore Banks -And how the ultra-rich use to forward their agenda →