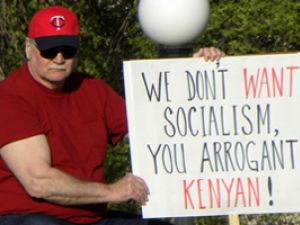 Shaking up the midterms was all fine and good, but now the conservative movement wants to “convert” you.

MotherJones.com — By Stephanie Mencimer What happens to the tea party now?

There’s been lots of speculation about what the tea party movement will do after the midterm elections. Not only have tea party activists been busy plotting their next move, they’ve already revealed much of their plan. It looks something like this: Raise money, have more tea parties, and join the permanent political class. It’s a far cry from a movement that has emphasized its insurgent organizing structure and disdain for politics as usual.

The Tea Party Patriots, one of the largest and most successful national tea party groups, which claims to represent more than 2,800 local organizations, is already focusing on ingratiating itself to the incoming Congress. TPP laid out much of its future intentions in a fundraising memo that was leaked to archrival and California talk show host Mark Williams in October. The document outlines the group’s 40-year vision for world dominion, so to speak. The first steps are simple.

According to the memo and subsequent emails to members, TPP will host a “freshman orientation” for incoming members of Congress (many of whom will be getting congratulatory phone calls from tea partiers at the urging of TPP’s leadership). It’s the tea partiers’ attempt to ensure that their newly elected members aren’t unduly influenced by the likes of former Senate majority leader-turned-lobbyist Trent Lott, who has said that he intends to “co-opt” the newly elected senators so they will “fall in line” with the establishment and party leadership. Step two is a leadership summit for TPP’s local coordinators to teach them how to maintain the pressure on elected officials tempted to sell out to the great American middle….

← The Coming Tea Party Civil War – Or the coming Libertarian-Christian collaboration
Japan Announces: NO PACKAGES OVER 1 POUND WILL BE AIRMAILED TO THE US – “Perfect Lockdown & Control” →