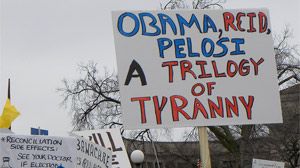 The tea party’s social conservative and libertarian wings are poised for a showdown that could decide the fate of the movement.

MotherJones.com In the months leading up to the midterm congressional elections, the tea party movement managed to tamp down on its internal divisions in pursuit of a shared goal of defeating Democrats. But with the elections over, the movement’s fault lines are starting to show, and tensions between the tea party’s social conservative and libertarian wings are poised to explode into an all-out civil war.

“It’s easier for them to be united around the political agenda of defeating Democrats than it is going to be agreeing on a legislative agenda,” observes Peter Montgomery, a senior fellow at the liberal advocacy group People for the American Way.

The most recent example of an emerging schism: Some tea party activists have linked arms with the gay conservative group GOProud to demand that the new GOP congressional leadership stick to the tea party’s core fiscal issues and not those of evangelical Christians. They sent a letter to House Speaker-in-waiting John Boehner and Senate Minority Leader Mitch McConnell imploring them “to resist the urge to run down any social issue rabbit holes in order to appease the special interests.” They write:

Already, there are Washington insiders and special interest groups that hope to co-opt the Tea Party’s message and use it to push their own agenda—particularly as it relates to social issues. We are disappointed but not surprised by this development. We recognize the importance of values but believe strongly that those values should be taught by families and our houses of worship and not legislated from Washington, D.C.

The letter represents a direct challenge by the tea party’s libertarian faction to the GOP’s historic fealty to its base of evangelical Christians. Represented in the GOProud letter by Andrew Ian Dodge, a Maine-based coordinator for the Tea Party Patriots, the tea party libertarians believe the movement has been successful in large part because it has avoided divisive social issues like abortion and homosexuality. They want the movement and the leaders it helped elect to Congress to stay focused on the limited agenda it set out from the beginning. Joining up with a gay Republican group certainly drives that point home. But it also promises to ruffle some feathers—and not just those of the establishment social conservatives who’ve been on the outside of the movement looking in. According to a recent poll, only 18 percent of…