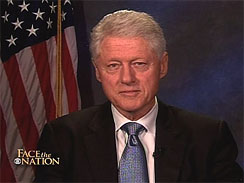 (CBS) Former President Bill Clinton said he believes President Obama was “shocked” and “disoriented” by the intensity of Republican opposition to his efforts to move the country forward.

Appearing on CBS’ “Face the Nation” this morning, Clinton also said that speculation over Mr. Obama losing his touch – owing to Washington gridlock – is not the whole story. He said that Republicans who learned during his own presidency that saying “No” can be rewarded at the ballot box are reusing that playbook now, regardless of how such tactics might stall economic growth.

Yet in a telling comment, when asked if President Obama’s reelection chances might be improved if the Democrats lost control of the House of Representatives in the midterms, Mr. Clinton said yes.

The former president discussed the current state in Washington, in relation to his own two terms in office; Democrats lost control in Congress after a rise in anti-government fervor in 1994, and yet President Clinton was able to score several major legislative victories with the help of Republicans.

Mr. Clinton said, even before running for president, that Mr. Obama had begun to build friendships among Republicans, and made overtures towards continuing to work in a bipartisan manner….